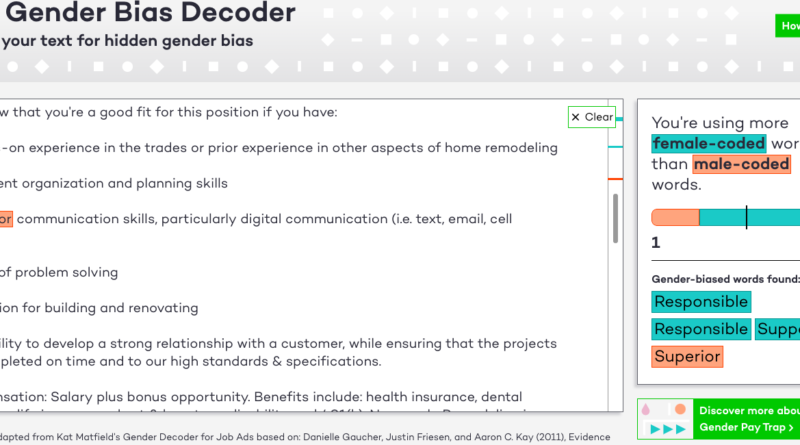 When we think of someone who works in construction, what are the first images that pop in our head? Are they usually male or female? Many of us might immediately picture a male since the construction industry is primarily male — with women representing just around 10% of the workforce — and this is usually what is depicted in the media as well. Does this also mean that job listings are tailored towards male candidates? We decided to do research on construction job listings to find out.

We analyzed 600+ job listings in some of the world’s largest cities such as New York City, Los Angeles, London, Sydney, and more. We looked at a large range of job roles to identify any gender bias that may exist in construction job descriptions. We also wanted to identify if there may be a gender bias in specific roles. Are administrative roles more female-centric? Or were trade roles more male-centric?

Here’s what we discovered.

What does it mean to have gendered wording in job listings and why does it matter? When creating their gender bias decoder tool, TotalJobs adapted insights from a notable research published in the Journal of Personality and Social Psychology

According to the publication, “Women were more interested in male-dominated jobs when the advertisements were unbiased, making reference to both men and women as candidates, than when the advertisements made reference only to men (Bem & Bem, 1973).” So by identifying gender biases in construction job postings, we can see whether the gap of women working in construction compared to men has to do with the wording of the job postings itself.

You may be wondering what kind of words are considered female coded or male coded. According to research from the Journal of Personality and Social Psychology, women are perceived as more community- and interpersonally-oriented than men. Whereas men are more often attributed with traits associated with leadership and agency. “A job advertisement for a company in a male dominated area might, using masculine language, emphasize the company’s “dominance” of the marketplace, whereas a company in a less male-dominated area might, more neutrally, emphasize the company’s “excellence” in the market.”

Given the fact that construction has traditionally been a male-dominated industry, our initial hypothesis was that certain jobs like trade roles would have more male-coded words. We also speculated that administrative jobs would potentially have more female coded words. But what we found surprised and encouraged us.

We discovered many job posts feature both male and female coded words, and most job posts are actually slightly more female coded — including listings for trade roles such as journeyman and electrician, fields where women only represent about 1% of the workforce.

Our findings indicate that the construction industry is making progress in connecting with female candidates and presenting inclusive work opportunities..

Steps in the Right Direction: How Construction Is Becoming More Inclusive

Our findings mirror some of the recent momentum we’ve seen companies and associations take to make the construction industry more inclusive. For instance, Laing O’Rourke has set itself the target of employing equal numbers of men and women among its 5,500 global staff by 2033.

Another example is from construction workforce intelligence solution, Bridgit, which is making a push for more inclusive terminology. When Lora McMillan, Senior Superintendent at Ledcor, challenged Lauren Lake, COO & Co-Founder at Bridgit, and other leaders at the women-owned company to consider more inclusive alternatives to words such as “manpower” and “foreman,” it sparked a call to action that they are taking to the entire industry.

The Associated General Contractors of America (AGC) and Autodesk also recently launched the Construction Diversity Image Library to increase representation of industry diversity. The library provides media imagery of diverse talent in the construction workforce, including women, people of color, and people of varying ages.

How to Bridge the Gap

Considering construction is still predominantly male, a gap remains between who jobs are marketed towards and who is actually filling the positions. To help understand why this is the case and what can be done to close the gap, we spoke with two industry talent experts from DPR Construction: Alison Tripp, National Talent Acquisition Leader, and Stacee Barkley, Global Diversity, Equity and Inclusion Leader.

“There has been focus and intentionality in the talent acquisition space to have more gender neutral and gender inclusive language. However, the language (gender coding) of job descriptions, does not address the potential perceived value proposition (or lack thereof) for women entering or staying in the construction industry,” said Barkley.

So what steps should companies and the industry take to help bridge the gap? Tripp and Barkley say we need to address the “elephant in the room” as it pertains to jobsite culture, build awareness around bias and misogyny via training and education, and hold people accountable for cultivating and maintaining cultures of inclusion and belonging.

“Build a better mouse-trap,” said Tripp. “In other words, enhance the value proposition of careers in the construction industry for women. Identify the barriers: pay, healthcare, childcare, eldercare, remote/flex work, etc., then mitigate if not eliminate those barriers. Give women a reason to come to this industry and stay in this industry.”

Lastly, We discussed what hiring managers should keep in mind to ensure job postings or other recruitment strategies are as gender-neutral as possible. “Unconscious bias education, hiring best-practices and cultural agility” are of chief importance. “Ensure talent acquisition has an embedded DEI strategy and practice,” said Barkley. “Diversity is insufficient if people don’t feel like they are welcomed and belong. It is not enough to attract talent, you want talent to stay. A talent acquisition and DEI strategy applies to the kaleidoscope of diversity and is not exclusive to gender.”

The reputation of construction being an “old-boys club” “must be deconstructed and reimaged through the lens of possibilities — recognizing both the business and human cases for a diverse and inclusive workforce.”

Bias in the interview process can be mitigated by, “providing your teams with standardized interview questions and a comprehensive definition of candidate competencies so all interviewers follow the same framework when assessing and ranking candidates. Also, evaluate the diversity of your interview teams,” said Tripp.

There are clear efforts being made in the construction industry when it comes to diversity — but there’s still a long road ahead. With more time, effort, and action, we will begin to see more diverse groups of people working and thriving in construction in the years to come.

We all have a role in creating a better, more inclusive construction industry. If you are looking to join the conversation and lend your voice, learn more by exploring Autodesk’s Advancing the Industry initiatives for resources, upcoming events, and more.

The post We Analyzed 600+ Construction Job Listings for Gender Bias: What We Found Surprised Us appeared first on Digital Builder.

When you need siding repairs, consulting with a professional is a good idea. Siding Repair Services will inspect the siding

Strategies On How To Be Efficient When Improving Your House